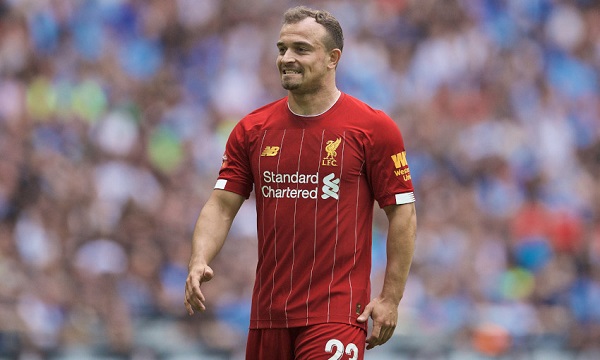 The Swiss attacker has been frozen out of the Reds line up this season and has barely seen action in any competition.

Footballinsider247 claims that the former Bayern Munich midfielder is hopeful of making a move out of Anfield as he looks to play more club football.

Bent, when he was asked about teams that could fight for Xaqiri, reckoned that the former Stoke City midfielder would not struggle to get suitors and named Arsenal as one of the teams who should try to sign him.

When asked which Premier League teams could end up banging down Liverpool’s door for Shaqiri, Bent told Football Insider: “I think Arsenal would probably take him, Manchester City nope, Chelsea nope, Spurs may potentially take him as well.

“I think there will be no shortage of takers so he has nothing to fear about that.”

Shaqiri has been in action for just 11 minutes in the Premier League this season and his persistent calf injury has also limited the number of times he has been named on the bench.

His performances in Liverpool’s 3-1 win over Manchester United and their 4-0 win over Barcelona in the Champions League semifinal last season showed how important he can be on his day.

I am not sure I agree with Bent on this. Why would Arsenal want to sign the 27-year-old when they are well blessed with forwards?

But then again, we are talking Arsenal here so anything is possible.