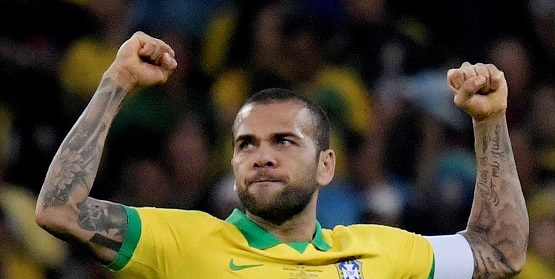 Arsenal signing Brazilian legend is not totally out of the question

Every transfer window legends of the game come on to the market, usually because they are past their prime and in their mid 30’s and that certainly applies to Dani Alves.

But regardless of whether he would be a silly signing or a masterstroke, it is not out of the question that he could become an Arsenal player next season.

The 36-year-old has played under Unai Emery and of course, there is the Brazilian connection with Edu.

Obviously, it is all about the money now, whoever Alves signs for will be his last paycheck and so the chances are that whichever club offers the biggest wage will land the experienced right-back.

But if Arsenal do offer a good enough personal package what could he do for us?

He is not young in football terms but still retains some pace, he is as experienced as they come and the likes of Ainsley Maitland-Niles could benefit significantly.

He could bring calmness in big games when the pressure is on and mentor the many young players just promoted to the squad.

Or, he could just be a passenger picking up one last big salary.

Either way, it is not an outrageous idea to believe that Alves could be a Gooner next season.