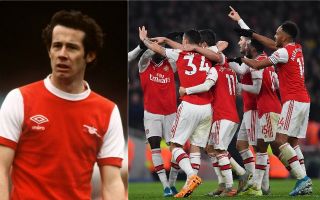 It’s hard to pick one highlight from the weekend win over Newcastle, but there’s no doubt the improved performance of summer signing Nicolas Pepe will be up there for most Arsenal fans.

The Ivory Coast international has been a little slow to get going for Arsenal this season, but he’s starting to look more and more like the real deal as the team as a whole continues to improve under new manager Mikel Arteta.

Pepe’s fine performance against Newcastle saw him pick up a goal and two assists in a 4-0 win, and it’s earned him a place in Garth Crooks’ Premier League team of the week on BBC Sport.

The pundit is full of glowing praise for the former Lille man, comparing his playing style to that of Gunners legend Liam Brady – high praise indeed!

Crooks said: “We’ve had to wait a little while for this young man to feature prominently in an Arsenal shirt. However, against a Newcastle side which didn’t seem to realise that their winter break had come to an end, Pepe looked as though he had actually benefited from the seasonal interruption.

“For the first time it looked like the Ivorian was running the show and I must say he looked impressive.

“The ball for Aubameyang to score was a beautifully flighted pass. There was also something about his game that reminded me of Liam Brady. I’m not sure if it was the way he carried himself or that left foot, but whatever it was it’s one hell of a good sign.”

Hopefully this can be the start of something special from Pepe as we’ll need more performances like this between now and the end of the season.