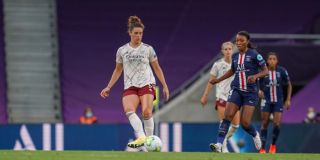 Jen Beattie shows the true strength of a woman!

It was an afternoon to forget for Arsenal as they lost 2-1 in the dying minutes to a Manchester City side that deserved to win based on their second half display.

But when health issues arise it seems that football and results are not that important. As it has been revealed that our very own Jen Beattie played through 90 minutes despite battling breast cancer.

Jen has revealed that she was diagnosed with cancer back in October but still took to the pitch for both club and country. And speaking to Football Focus Jen spoke about the moment she got the diagnosis, stating: “I’ll be honest, you automatically think the worst. I asked the question: ‘Am I going to die? It was complete panic and disbelief and I was scared. That was the overriding factor throughout the whole process.”

She also goes on to describe the journey as a “big learning process. You never think anything like that is going to happen to you. You probably think, as a sportsperson, not that you’re going to be immune, but that it’s never going to be as close to home as yourself.”

Despite her battle though, following her surgery she was then told that the cancer had not spread and so she would not need chemo. That for Jen was what she described as “the turning point”.

At the age of 29 and having gone through this battle of cancer Beattie has now turned her focus to ensuring that she raises awareness of having breast cancer at a young age and she wants to encourage women to get checked, adding:

“I know people are maybe scared to go to the hospital and scared to get checked out because of Covid, but there are still ways to do it. Whether you’re 29 or 79, it doesn’t really matter and you might have to deal with it at some point. You may live the healthiest lifestyle possible, but you still need to go and get these things checked and be really conscious. Even if it is still a horrible process to go through, it can be a much better ending if you just go and get checked.”

In raising awareness Beattie donned a pair of pink boots against City and despite the result hopefully more people have become to realise that even footballers can get unfortunate diagnoses, yet Jen is proof that you can get through it and continue to do what you love.

Although she is due to start radiotherapy in the coming weeks there is no doubt that Jen has the strength and mentality to be able to get through it and come out on the other side, god willing.

And as I have said before; No matter what happens in football it is never as important as the health of a person, and it goes to show that life really is so short and things can change in an instant!

I don’t know if the players read these articles or are aware of them, but I want to wish Jen Beattie the best health and luck in the world on her journey through this battle and I hope she gets through this and comes out even stronger on the other side because we know she is capable of doing so!

Football is always second best to health and I am sure she will continue to do what she loves in the way that she has been doing because she really is a role model for young girls and women, and even some men, around the world!

Arsenal Women back in contention after superb win over Man United
21 March 2021, 7:56