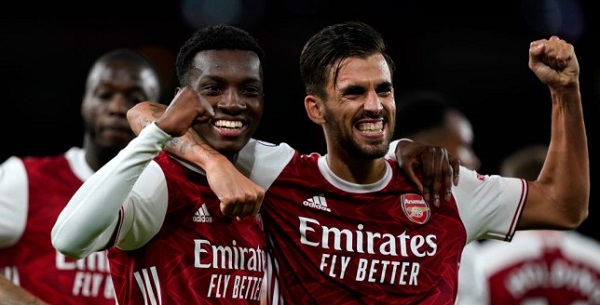 Love is all around after the Fulham pre match bust-up!

Dani Ceballos and Eddie Nketiah looked as loved up as ever when celebrating the winner against West Ham over the weekend. A complete contrast to how things were just last week, when the pair were seen to square up prior to kick-off.

Of course it is a nice for Arsenal fans to see the players playing as a team and looking happy together, on and off the pitch, but after seeing them at each other’s throats during the pre-match warm up against Fulham, it was obvious that tensions were high after Ceballos went in a little too rough on a couple of challenges on Nketiah and he rightly so, wasn’t best pleased with the nature of the challenges.

But fast-forward a week, and while Ceballos had a quiet game, managed to wake up in time to produce an assist for Nketiah to put Arsenal 2-1 up against West Ham. The boys were then seen celebrating together, and even posed for a picture shortly after the goal to show that all is now well in both camps, and that the little scuffle has been laid to rest.

Speaking after the game Nketiah even told SkySports (via the Express) that what had happened last week was sorted now and that they moved on as teammates: “We had a bit of a coming together. The reaction was there. We made up and got on with it. It was a great pass across, good vision. I tried to stay onside. It was an easy finish from there. It was nice for him to make the assist – it’s all love now.”

It is nice to see this particular thing, as we never want there to be animosity between players, especially as this season is a going to be key in determining a lot of players’ positions and showing fans the level of attitude that they hold.

With a manager like Arteta though, we know that he will not let anything like this get in the way and if it is not sorted, we know what he will do don’t we Gooners?