Arsenal stats better than Barca in everything but goals!

Some hope for Arsenal fans? RC

Barcelona currently boast the three best players in the world as individuals, however it’s their connection and understanding that the trio share which makes them, arguably, the most frightening front-line in football history. The combined force of Lionel Messi, Neymar and Luis Suarez make the Catalans hot favourites to become the first team in the Champions League era to retain the European Cup.

Arsenal have been dealt the unenviable task of facing Barcelona once again when the pair meet at the Emirates in the first-leg of the last 16 on Tuesday night.

In the build up to the clash between the English and Spanish sides, fantasy football game www.oulala.com have studied the stats to reveal the best combined XI based purely on player performance data from the Premier League and La Liga.

Oulala’s stats team have taken a look at two players in each position and analysed a host of key areas to determine who makes the grade and features in our combined Arsenal and Barcelona stat-based best eleven.

Unfortunately, someone had to go head-to-head with Lionel Messi, so Mr Chamberlain – we apologise.

Here’s who made the cut… 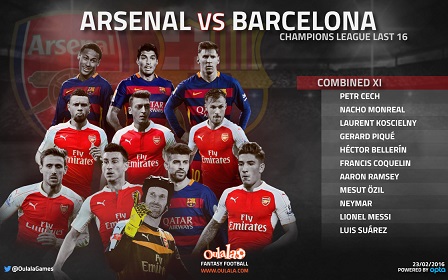 Gerard Piqué narrowly edges Per Mertesacker for the second centre-back spot. On a per game basis, Piqué has made more successful tackles (1.2 to 1.1), more interceptions (2.2 to 1.3) and more blocks (0.6 to 0.4). While Mertesacker has made more clearances per game (5 to 4.4) and boasts the better tackle success rate (71 to 58 per cent). The duo cannot be separated aerially having each won an average of 2.2 aerial duels per game.

Francis Coquelin has overshadowed Sergio Busquets statistically this season. The Barcelona midfielder may have created more chances per game (0.6 to 0.2) and matched Coquelin for blocks per game (0.2), but the Frenchman has led the way in every other key area this season. Coquelin has a better pass completion rate (90 to 89 per cent), has won more tackles (2.3 to 2), made more interceptions (2.3 to 2) and more clearances (1 to 0.8) per game.

Aaron Ramsey has justified why Barcelona were linked with a move for the Welshman, dominating Ivan Rakitić in a host of key areas this season. The 25-year-old has completed more successful passes (59 to 43), created more chances (1.4 to 1), more key passes (1.3 to 1) and has won more tackles (1.9 to 1.2) per game. Ramsey has also registered more assists (3 to 0) and more goals (4 to 3).

Mesut Özil gets the better of Andres Iniesta in the playmaker role. The players share the same pass completion rate (88 per cent), while Iniesta has made more successful passes per game (61 to 53). However, the German has led every other key stat this term. Özil has created more chances (4.4 to 1.3) and made more key passes (3.7 to 1.2) per game. He has also registered more assists (17 to 1) and scored more goals (4 to 1). 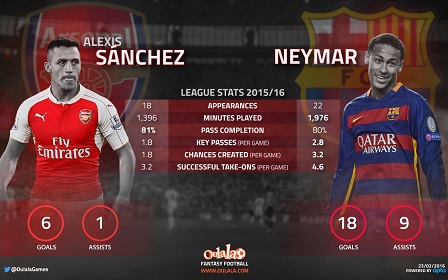 Neymar comfortably takes the left-sided forward spot from Alexis Sánchez . The Chilean edges pass completion (81 to 80 per cent), but then the Brazilian takes over. Neymar has made more key passes (2.8 to 1.8), created more chances (3.2 to 1.8) and has completed more successful dribbles (4.6 to 3.2) per game. He has also scored more goals (18 to 6) and recorded more assists (9 to 1).

Lionel Messi unsurprisingly beats Alex Oxlade-Chamberlain to the right-sided forward spot. Messi has scored more goals (15 to 1), registered more assists (7 to 0), made more key passes (1.5 to 0.9), created more chances (1.9 to 0.9) and completed more dribbles (4.1 to 1.6) per game. Chamberlain fights back with the better pass completion rate (82 to 81 per cent).

Luis Suarez dominates Olivier Giroud in every key area. The Uruguay international has scored more goals (25 to 12), enjoyed a better shot accuracy (57 to 54 per cent) and a better conversion rate (28 to 16 per cent) from a higher number of shots per game (3.8 to 3). Suarez comes out on top creatively too. He has created more chances per game (1.4 to 0.9) and has registered more assists (10 to 4).