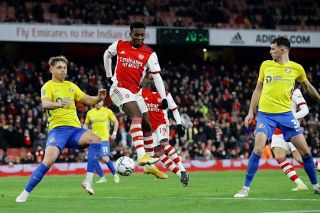 Eddie Nketiah seems to be on his way out of Arsenal, and that could happen next month.

The striker showed his quality by scoring a hat-trick against Sunderland in the quarterfinal of the Carabao Cup.

He is still struggling to get minutes in the Premier League and would be out of a contract at the end of this season.

He has rejected a new deal from the club, but they are still trying to persuade him.

The Daily Mail says he is looking to leave the Emirates as things stand, and a suitor could sign him next month.

Nketiah has been one of the finest youngsters to come through the ranks at the club.

However, he wasn’t in good form when he got the chance to play regularly previously.

That is one reason the club waited until now to offer him a new deal and the Englishman would be a good squad member if he stays.

All Arsenal can do now is to keep pushing to keep him but if he insists on going then it is probably better to get something for his signature next month as opposed to losing him for nothing at the end of the season.