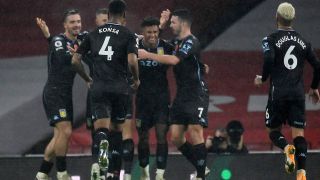 Arsenal will be thoroughly disappointed with their performance today, as Aston Villa have been allowed to run riot at the Emirates.

Our team was second best from the off, and even after a gift from VAR, where they denied the Villains their opening goal due to Ross Barkley possibly obstructing Bernd Leno’s view from an offside position.

This early present wasn’t enough to spur our side on, or give them the wake up call that they needed, and the next goal wasn’t too dissimilar either.

Villa’s second opening goal came from more work down the left flank, although why the defenders appeared to have been told to stand off their men right on the edge of the box, I do not know.

Our opponents were allowed as much time on the ball as they wanted just on the fringe of our box, and we sadly paid the price for it.

We managed to make it to the break at 1-0 down, and you would have expected a fired up side to come out after the interval, but there was no such thing to be witnessed.

Arsenal meandered around with their task, and Villa were not looking to sit back and allow any mistakes to go unpunished.

Ollie Watkins was the man to double their lead with a diving header after Ross Barkley made a run in behind the defence to volley into the box for the striker.

The Englishman added his side’s third moments later when Emi Martinez cleaned up at one end to set Jack Grealish running the length of the pitch, before he sets Watkins through into the box, and he makes no mistake.

Even at 3-0 down, our side wasn’t able to bring themselves to fight, and we looked more likely to concede a fourth than we did find the net, and there is no question.

The best team won today, and Martinez’s part in their third goal will not have gone down well with the Leno haters…

What in the world went wrong at Arsenal today?