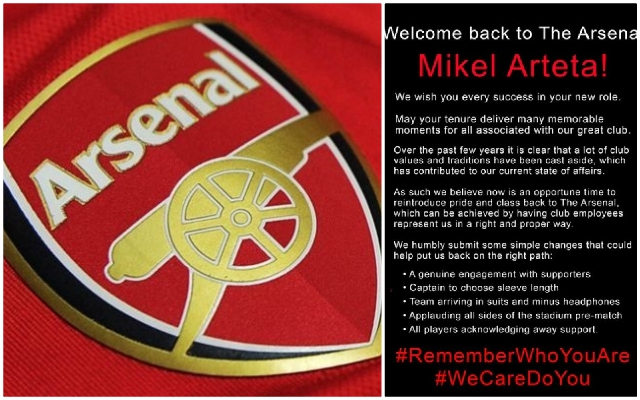 In a statement posted by the Arsenal’s Supporters Alliance, the Arsenal team have been issued several demands, one of which relating to players arriving for matches wearing headphones.

The statement calls for Arsenal’s players to make a ‘genuine engagement with supporters’, as well as bizarrely suggesting that the captain will choose the ‘sleeve length’.

Do you think that all of our players wearing the same size sleeves will actually have a considerable impact on the team’s performance – is this the kind of issue that we as a fanbase should focusing on?

As per BBC Sport, Arteta has been handed a three-and-a-half-year deal by the Gunners, this will be the Spaniard’s first managerial job.

Check out the statement below:

@m8arteta Welcome back to The Arsenal, Mikel Arteta! We wish you every success in your new role.

May your tenure deliver many memorable moments for all associated with our great club.#wecaredoyou pic.twitter.com/z38KboGzkp

The statement also calls for the team to arrive at matches in suits and without headphones on.

The Arsenal Supporters Alliance add that the team should applaud ‘all sides of the stadium pre-match’ – it’s unsettling to see that such an otherwise standard gesture of respect towards fans is being demanded for.

Arteta will take charge of his first game on Boxing Day as we travel to Bournemouth.

We’ve only managed to win one of our last 13 games across all competitions and a solid run over the Christmas and new year period would give us a fighting chance to seriously challenge for a top six spot this season.