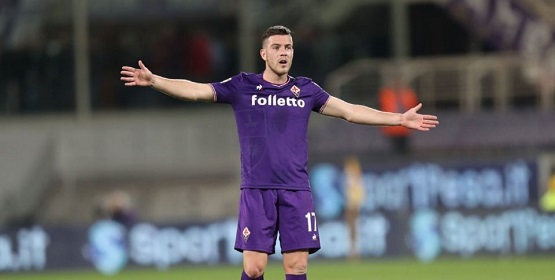 You can add another name to the long list of midfielders being targeted by Arsenal in their quest to find a successor to Aaron Ramsey.

According to the latest transfer speculation, Arsenal has made contact with Italian outfit Sampdoria in regards to their midfielder Jordan Veretout.

It had been assumed that Veretout would be joining Fiorentina’s Serie A rivals Napoli who have been in discussions with the Frenchman for some time now.

However, that has not put Arsenal off thus the eleventh-hour bid to snatch the player from under the noses of the Serie A runners up.

Veretout is seen as the ideal replacement for the departed Ramsey, he is a box to box midfielder in the same mould as the Welshman and was regarded as one of the best players for Fiorentina last season.

The 26-year-old has previously played in English football with Aston Villa but that stint was a failure, he has, however, been a completely different player since his move to Italy.

Roma and Seville are said to be keen on his signature and while no fee has been mentioned he is not expected to come too cheaply.

And apart from the fact that Napoli has almost signed him, there is also the issue with Champions League football. By all accounts, Veretout is keen on playing in Europe’s elite competition next season.

So, there you have it, Arsenal want to sign a player that is apparently very similar to Aaron Ramsey in style following a decent season but I do have some issues with this potential signing.

For starters, he managed just five goals and three assists last season, hardly inspiring and I cannot ignore the fact that he has failed in English football once before.

I am not saying he will not be a success for us but I just find him too risky a proposition, he simply does not give me the required confidence.