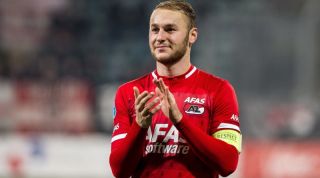 Reported Arsenal target Teun Koopmeiners is believed to be pushing for an exit from AZ Alkmaar this summer, and was left on the bench as his side lost 1-0 in their opening league encounter.

The midfielder was an unused substitute this week, despite the fact that he is the club’s captain, and given that he scored an astonishing 17 goals last season.

His manager claimed that they only wanted players who were fully focussed on AZ, as reported by Voetbalzone seemingly claiming that the player has his eyes set on a move elsewhere, which could well open the door for a potential suitor to come in.

Arsenal are believed to be amongst those who have shown an interest in the 23 year-old, as reported by De Telegraaf, although they are unlikely to be the only club following after his impressive goalscoring campaign in 2020-21.

Goals from midfield was something that was largely lacking last season, and having just allowed Joe Willock to join Newcastle, we could well have an opening in the squad.

With just two weeks left of the summer transfer window, and after our embarrassing defeat to Brentford on Friday, you would assume there would still be incomings into the team, and Koopmeiners should fit our policy of signing young players with the potential for growth.

Arsenal in danger of missing out on midfielder with Atalanta preparing ‘official bid’
7 June 2021, 11:02