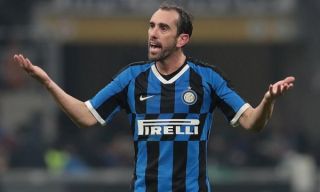 Arsenal target Diego Godin is set to make a move to the Premier League in the summer, but the Gunners may struggle to land him.

However, he has struggled to adapt to Antonio Conte’s style of play and that has seen him relegated to the bench this season.

The Uruguayan is still considered one of the best defenders of his generation and Premier League teams think he still has something to offer.

Arsenal have been long term admirers of the defender but Inter beat them to his signature last summer.

He is now set to move to the Premier League, but the report via Football-Italia is claiming that Manchester United and Tottenham are the main teams vying for his signature.

The Red Devils targeted the defender when Jose Mourinho was their manager but they failed to convince him to join them from Atletico.

He has, however, remained on their radar and the report claims that they want to save him from his Inter Milan misery.

Jose Mourinho is losing Jan Vertoghen on a free in the summer and the Portuguese manager wants the 34-year-old Godin to replace the Belgian star.