It seems as though every top club in Europe has been linked with this super talented young player, but if Arsenal play it right, then it could be the Emirates stadium where the Norwegian international takes his burgeoning career to the next level.

According to a Daily Mail report, Martin Odegaard is set to spend some time in London training with the Arsenal squad as he weighs up his options, with Bayern Munich, Man City, Liverpool, Barcelona and many others all keen on taking him from his current club Stromsgodset in Norway.

So it is pretty clear that the lad is really something special and if Arsenal can impress him with our facilities and coaching staff, as well as the reputation Arsene Wenger has for giving young players plenty of chances, he could soon be a young Gunner.

After hearing that Wenger missed out on the likes of Messi, Ronaldo and Ibrahimovich when they were young, could the Frenchman finally get this star of the future to sign for Arsenal? 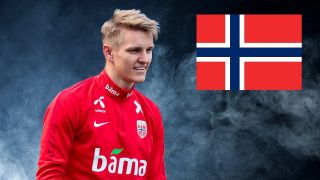