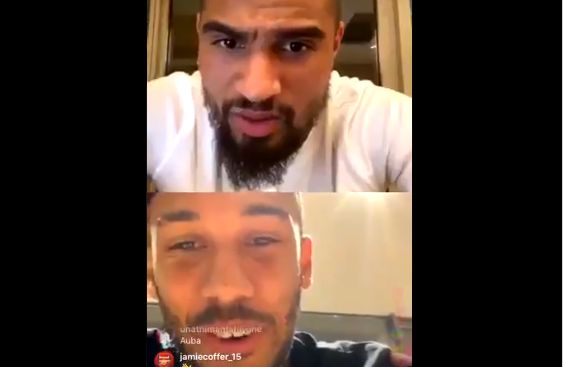 Video: Aubameyang’s awkward response after being quizzed over Arsenal future

Arsenal striker Pierre-Emerick Aubameyang rather awkwardly dodged a question about his future from Kevin-Prince Boateng.

Watch the video below as the pair live-streamed their chat, which includes Boateng asking Aubameyang about his Arsenal contract as he heads towards the final year of his deal at the Emirates Stadium.

Video: Besiktas’ Kevin-Prince Boateng on Instagram Live with Pierre-Emerick Aubameyang, asking him about his future at Arsenal. #afc pic.twitter.com/EOAI4cBjD4

The Gabon international didn’t really give much of a response, as you might expect, before Boateng joked that he should join him at Besiktas.

Gunners fans everywhere will be hoping this situation can be resolved, though of course the more pressing issue is sorting out the coronavirus pandemic and hopefully getting football going again as soon as possible!