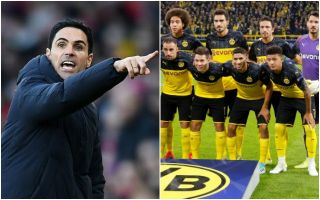 Deal in place: Arsenal to be beaten to £30million midfielder transfer

Arsenal are reportedly set to miss out on one of their rumoured summer transfer targets as it looks like Jude Bellingham is heading to Borussia Dortmund.

The Gunners were recently linked as being among Bellingham’s many admirers in a report from the Daily Mail, but German outlet Bild now claim Dortmund are set to see off big-name competition to bring the Birmingham City midfielder in for around £30million.

Dortmund have a fine recent record when it comes to snapping up the best young players and giving them the chance to shine, with another young Englishman Jadon Sancho perhaps the best example of that strategy paying off.

Bellingham, 16, has shown himself to be one of the next big wonderkids of English football after a superb season in the Championship, and it would have been great to see him at Arsenal.

We have improved our ability to land the best youth players in recent times, with Gabriel Martinelli, Matteo Guendouzi and William Saliba looking smart signings.

Still, we perhaps have some way to go before we can persuade players like Bellingham that we could do as good a job with them as Dortmund can.