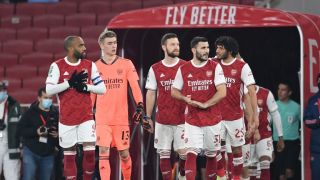 Arsenal update ahead of Chelsea match with up to three missing

Arsenal will be without at least two players for the clash with Chelsea on Boxing Day, as confirmed by their official website.

Thomas Partey is confirmed as remaining out ahead of the big clash come Saturday, but question marks remain over forwards Aubameyang and Martinelli.

Pierre-Emerick Aubameyang has missed our last two matches after injuring his right-calf in training last week, and needs to be assessed ahead of our clash with the Blues.

Gabriel Martinelli on the other hand has only recently returned to the first-team fold after six months on the sidelines, but was unable to complete the 90 minutes against Manchester City in midweek, and will also need to be assessed before Saturday.

Arsenal.com confirmed that his right shin sustained ‘heavy impact’ in the opening half with the Citizens on Tuesday evening, but they hope he will return to full training ahead of the clash.

Granit Xhaka will return to availability after he completed his three-match ban after getting himself sent off against Burnley for grabbing a player by the throat, although it remains to be seen whether he will be thrown back into the fold after disappointing the manager with his actions.

Chelsea have their fair share of issues also however, with Hakim Ziyech missing the clash, while both first-team full-backs Ben Chilwell and Reece James are doubts currently, Frank Lampard confirmed (via the DailyMail).

Spanish report says midfielder is struggling at Arsenal and hints at regret
25 October 2021, 20:45