Arsenal v Chelsea Preview, Line-up and Score Prediction (and how to watch it online) 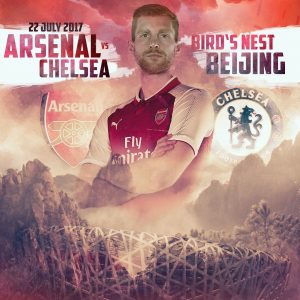 So today is the day that we play Chelsea again, and perhaps this is the first season for a long time where Arsenal can go into the match without an inferiority complex after many years of being humbled by our neighbours. In the League last season we comprehensively destroyed Antonio Conte’s men at the Emirates, but they returned the favour at Stamford Bridge which set them up to run away with the Premier League trophy.

By the time we met them in the FA Cup Final, very few punters fancied our chances, but we surprised everyone and came from behind to stop them winning the Double, and ended the season with 10 wins out of 11 games and full of confidence for the coming campaign. And now we face them again in which will be the first of at least four meetings this season, and Wenger is very keen to carry on our winning run.

As Le Prof said ahead of today’s game: “It’s always difficult to predict, but [although] it’s a friendly between Chelsea and Arsenal, it’s not really a friendly because there’s always some pride at stake and some London desire to have the superiority.

“It was a very interesting game in the final of the FA Cup, and we play against Chelsea in the Community Shield, and again very early in the season.

“We know each other very well and it’s difficult to know how prepared Chelsea are and how far we are with our preparations. Saturday will be a good indication of that and we were good against Bayern. This is another test for us before the season.”

One reason why I believe that Arsenal will have the advantage is that we have already played three matches and have gained some match fitness, while this will be Chelsea’s first warm up game after the summer break. I reckon Wenger will put out the strongest side available to him today (at the beginning anyway) to prove our superiority before giving other players a run out.

Koscielny thinks he is ready to play and did the pre-match conference with Wenger so I think he is a shoe-in to start, and with Mertesacker and Monreal our only other two senior defenders on tour that looks nailed on.

So here is my line-up prediction….

With Chelsea not having played any games yet, I wouldn’t dare to know who is fit or not, but here is the squad they have taken on tour.

So obviously Diego Costa won’t be playing for them again, and his replacement Alvaro Morata has only just signed, so the Blues are only left with Batshuayi and Remy as strikers. This can only work in Arsenal’s favour…

So with Arsenal’s match fitness and Chelsea’s lack of strikers (and our excellent defence) I think Arsenal will dominate this match, and Arsene Wenger will be delighted!

My score prediction is…. Arsenal 2 Chelsea 0

You can watch the game online at Arsenal.com from 12.25 (Click this link)

Come On You Gooners!