By Admin Pat - 13 August 2016, 19:02
Arsenal welcome Liverpool to the Emirates on Sunday in the standout fixture in the Premier League’s opening weekend. With so much defensive uncertainty at both clubs, fantasy football managers will be focusing their attention to the volume of attacking talent on offer.
While Arsene Wenger has been relatively quiet this summer, with defensive-midfielder Granit Xhaka the only big-money signing at Arsenal, Jürgen Klopp has been a little more ruthless, drafting in the likes of Georginio Wijnaldum, Sadio Mané, Joël Matip, Ragnar Klavan and Loris Karius as he looks to redevelop the Liverpool squad.
As two of their side’s danger men, we’ve identified Alexis Sánchez and Philippe Coutinho as two attacking players that will be highly popular with fantasy football managers this season.
As the game between Arsenal and Liverpool draws closer we’ve asked our stats team at Oulala to break down both player’s numbers in the Premier League last season in a bid to reveal which player deserves a place in your fantasy football team this weekend. 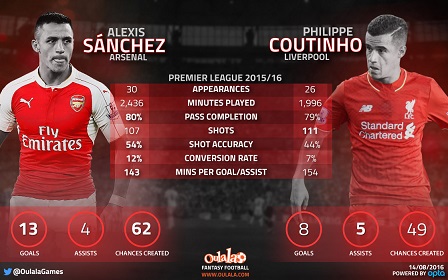 Of the eight key areas analysed, Sánchez comfortably came out on top in six.

The Chilean led Coutinho for pass completion (80 to 79 per cent) and was far more clinical in the final third, netting five more goals (13 to 8), while also bettering the Brazilian for shot accuracy (54 to 44 per cent) and conversion rate (12 to 7 per cent). Sánchez was also the more creative of the pair, laying up 62 chances for teammates, in comparison to Coutinho’s 49. Although the Liverpool star registered an assist more (5 to 4) than the 27-year-old.

Overall, Sánchez averaged a goal or an assist every 143 minutes, 11 less than Coutinho’s figure of 154 minutes.

While both players offer an obvious threat for their clubs, Alexis Sánchez will provide your fantasy football side with slightly more fire-power when it really matters and is our choice this weekend.