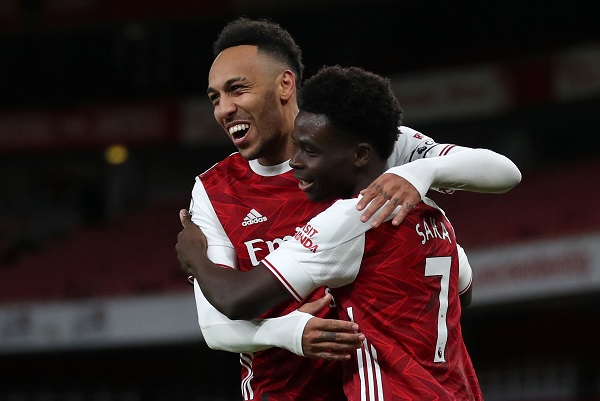 Here are the ratings for last night’s game against Newcastle…

Bernd Leno – 6
Another easy game for the big German.

Cédric Soares – 7
I think the Arsenal fans are growing to like his style. Good game and good attacking moves too..

Rob Holding – 7
The master defender at the moment. Deserves the praise he is getting.

Kieran Tierney – 6
Good game down the wing. Maybe not as commending as usual.

Thomas Partey – 7
Great to have him back, and a well-earned assist. We will improve if he plays regularly.

Granit Xhaka – 7
Another great game for the big Swiss. Could be the perfect partner for Tommy.

Bukayo Saka – 8
The energizer bunny cannot be stopped at the moment. Full of energy and zest.

Emile Smith Rowe – 8
Brilliant assist. He will be very hard for Arteta to drop.

Alexandre Lacazette – 7
Didn’t score but worked as hard as usual.

Pierre-Emerick Aubameyang – 8.5
The Pink Panther is back! I want to see him score every game from now on. My Captain!

Substitutes
Martinelli (82 min) – Needed a run out I think.

Arsenal have no “serious bid on the table for Aubameyang” – Newcastle not interested
6 January 2022, 10:37