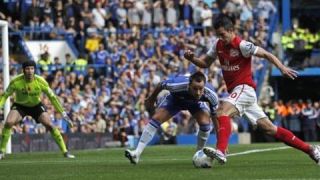 Arsenal went ‘above and beyond’ but failed to sign Chelsea legend

John Terry has revealed that he had his pick of clubs in 1995, but decided to turn down both Arsenal and Manchester United to join Chelsea.

The then 14 year-old was impressing in West Ham’s youth set-up and was looking to move to a bigger club, and surprisingly took up the offer from the Blues, despite strong resistance from his father.

Terry told the Footballer’s Guide to Football podcast: “I had the option between Arsenal, Chelsea and Manchester United and to be fair all of them went above and beyond.

“The moment I walked into Chelsea, it just felt right. I know that’s going to sound really bizarre.

“Again, my dad never wanted me to sign for Chelsea. Actually, on the picture of me signing my schoolboy form at the club, my dad refused to go on the pitch with me.

“Glenn Hoddle goes past and my dad’s going ‘You’re not signing for this football club, we should sign for Manchester United’.

“You needed a parent, so my mum said she would come and sign it with me, my dad’s going mad at my mum, ‘No you wont’.

“There’s a picture of my mum and Graham Rix signing my contract, but my dad refused and absolutely kicked off that night. Again, me being the character I was, I knew Chelsea was right for me.

“One night that was probably supposed to be one of the best nights of my life turned out to be a tough one for a young 14-year-old to be honest.

“I just knew and loved Chelsea from the moment I walked in and never looked back, I still love the club and look out for every result now.”

Little would his father have known that a rich Russian owner was under a decade away, and his takeover would see the West London outfit become heavyweights in the division also, and Terry’s decision would pay off in such a way that he would pick up five Premier League winners medals with the club, five FA Cups and back-to-back European wins in the Champions League and Europa League respectively.

All could have been different at Arsenal however, and he could have learned his trade under the guise of fellow England international Tony Adams in his early years.

Could Terry have become an even better player in North London? Is it surprising to hear that a young player would have overlooked Arsenal for Chelsea in the pre-Abramovich era?