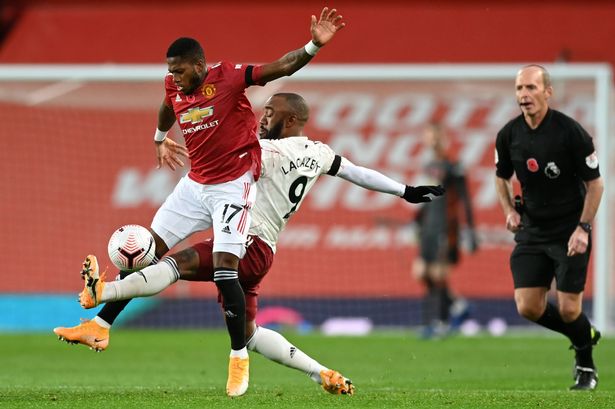 Good morning, afternoon or whatever part of the day or night it is for you lovely Arsenal people! We’ve won away at Old Trafford! I remember that day in 2006 when Fabregas danced past Ronaldo to give it to Adebayor, who slid it in their net. Fourteen long years later, we went there, were the better team and managed to grind out the result.

We dominated United in midfield. The key for me was dropping Xhaka and Ceballos. They were utterly atrocious against Leicester, while Partey and Elneny were dynamic. This was probably Mo Elneny’s best game for Arsenal. He was strong on the ball, looking for forward passes, demanding the ball at his feet, covering in defense, everything was there. The same applies for Partey who had Pogba in his pocket all game. He made 11 ball recoveries! That performance is what the hype was all about when we got him, and why we paid 45 mils for him. Now it’s up to him to keep it up.

Another new signing that was just excellent was Gabriel. A steal at 27 million, he’s been one of our most solid players this season. He was aggressive, pressing United players on the ball up to the half way line. He was a bit lucky in the second half with a poor tackle on a yellow, but his desire and determination were excellent.

I was also pleasantly surprised with Holding. The boy has been unlucky with injuries every time he’s just about to have a solid place in the team, but he was strong in the air, good on the ball and our back line with him, Gabriel and Tierney made me feel comfortable. We were playing out of the back trying to draw United in and create space and the movement in our midfield helped that.

Another major improvement on our last 2 league games was the right hand side. Willian had his first proper game since Fulham. Unlucky with the bar, set up Bellerin for the penalty, there was a purpose for him on the pitch. Hector was present up the pitch, won the penalty, set it up for Saka on a plate, almost set up Auba, I was really happy with him.

We just were more positive in our approach and we got rewarded for trying to control the game instead of waiting to pounce on a mistake, even though that’s what eventually won us the game. We even had an idea how to shut up shop. We took the lead twice at OT under Emery and failed to keep it for 10 minutes combined. Yesterday we kept it together and managed out the game.

Overall I must give it to Arteta this time for actually changing things up and learning from past mistakes. He tried Mustafi against Leicester, was let down by him again and went with Holding instead and I liked it. No Xhaka, no Dani, no sideways and back and no problems.

This win feels so good, because it’s our first in 30 games against the ‘top six’ (whatever that means these days) away, but we shouldn’t get carried away. If there was a downside to our play, it’s the fact we again didn’t create too many clearcut chances and the once we did we missed. Saka really should’ve done better with a free header, or at least hit the target and force the keeper to make a save. Willian hit the bar, and I thought if it was Pepe on his left foot where it might have ended, but it wasn’t the easiest chance again.

Then we had that counter where Alexandre Lacazette tried to slip Auba but gave him the ball just a bit behind and his shot went wide. Arteta was right about the small margins. If we were a little more precise we could’ve scored from open play, which is a bit of a problem for us in recent times. I was worried that missing those chances might affect our confidence again, but Pogba luckily for us was too rash and we won the game.

This game kind of suited us though. They were looking a bit better with a huge CL win, we were doing poorly in the league, it was the perfect set up for when nobody expected us to turn up. Now we have Villa and Leeds, who’ve given teams like City and Liverpool a real game. It’ll be a different challenge where we’ll need to break and the pressure and expectations will be back on us.

I expect us to be brave and maybe even try to improve on that goal difference of just plus 2. But hey, we have the best defense in the league so far and that clean sheet feels so good!