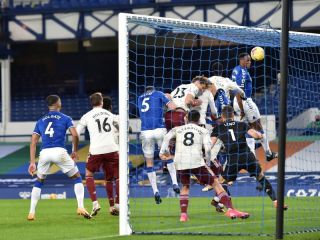 Arsenal have suffered yet another Premier League defeat, this time to an in-form Everton side, as we flatter with the idea of a relegation battle.

The Gunners are at risk of dropping to 16th in the Premier League table if Brighton are to win against Sheffield United tomorrow afternoon thanks to their latest loss in Merseyside.

There is little to argue over the fact that our side lost this evening, with the Blues enjoying all the best goalscoring opportunities.

Everton went in front thanks to Dominic Calvert-Lewin’s effort from inside the box, while he will thank Rob Holding for redirecting his effort, which was going wide, beyond Bernd Leno and into the goal.

The scores didn’t settle at 1-0 for long however, as Ainsley Maitland-Niles sprinted into the opposition box to claim the ball, only to be taken down by the surprised Everton midfielder Davies, who hadn’t spotted the Gunner.

Nicolas Pepe was the man to step up and score from the spot, sending Jordan Pickford the wrong way as he placed his effort into the left bottom corner.

The Blues did manage to take the lead once again however, with Yerry Mina putting away a header, with the defender running short to gain a lead on the opposition, before leaping high to head powerfully on goal, although you could argue that Leno should have done better to deny him.

We went into the break just after third goal, but the second-half didn’t bring much joy either.

Both Lacazette and Martinelli were introduced, but were unable to help to carve out any serious opportunities, while Joe Willock came off the bench also.

I wish I could tell you that we deserved anything more than the result, but unfortunately the best team took all three points, and we now go into the match with Manchester City in the Caribao Cup in midweek with horrendous form and confidence.

All eyes will be on the manager after we suffered yet another defeat, and I’m struggling to defend his position any longer.

Preview: Arsenal Women looking to bounce back against improving Everton side
10 October 2021, 10:39