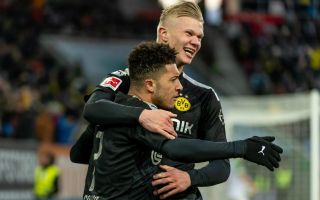 Arsenal have been linked with Jadon Sancho in the past.

Pundit Owen Hargreaves has named Arsenal as one of the teams who’d “love” to seal the transfer of Borussia Dortmund star Jadon Sancho.

This follows Sancho hitting a brilliant hat-trick for Dortmund against Paderborn on Sunday, with the England international showing once again what a world class talent he looks set to become.

Hargreaves is certainly a fan, and raved about the 20-year-old after the game, as quoted by the Metro, describing him as a “generational talent” that he’d love to see back in the Premier League.

Sancho notably left Manchester City for Dortmund at a young age, with Arsenal one of the clubs keen to sign him before he ultimately opted for the move to Germany, according to a report at the time from the Independent.

To be honest, it seems unlikely we could afford Sancho now, but Hargreaves still thinks we’d be one of the clubs interested in the wonderkid, and it’s nice to imagine we might have a Nicolas Pepe-esque surprise up our sleeves again, even if that’s highly unlikely.

“He makes every team better, that’s for sure,” Hargreaves is quoted by the Metro.

“Everyone would love to have him. Man United, Man City, Liverpool, I think he’s that good that he gets in all of them.

“United, Chelsea and Arsenal would all love to have him. It depends on personnel and who could afford him?

“It will cost a lost but he’s a generational talent, truly remarkable with his goals and assists and he can play in different positions.

“He’s going to cost a lot but he’s worth it, I’d love to see him back in the Premier League.”