As Bukayo Saka goes off to join the senior England squad yet again, we will have time during the interlull to focus on how the 20 year old made his meteoric rise to stardom, starting out at the Arsenal Academy in Hale End.

His youth coach Ken Gillard has been describing what he was like when he was younger. “Bukayo was always a prospect that was identified very early at Hale End, even prior to me coming to the club,” Gillard sais in an exclusive interview in CaughtOffside. “He was always a very effective team player, always influencing games, scoring goals, creating goals, playing different positions. Even at a young age he could play left-back, left wing, right wing, or as a number ten.

“The big things that Bukayo had, whatever position he was in, was that he played with a smile on his face. He loved playing football.”

“We didn’t push him too much at first,”

“We sort of dipped him in and out of the team. I remember in particular we played Liverpool in the FA Youth Cup quarter-final – he started on the bench. When he came on he scored the equaliser and then set up the winner for Tyreece John-Jules as well.”

“He took everything on board and I can’t really remember a day he missed a training session. 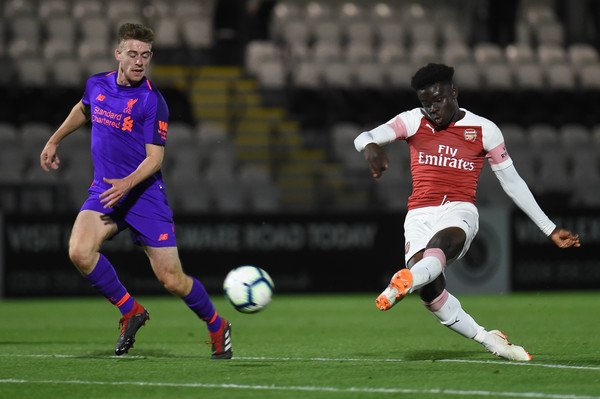 Gillard also thinks that Saka’s incredible success is a great example to the other kids in the academy, as they can see that if they keep working and improving there could be a place for them in the first team as well. Gillard continued: “It fills everyone with the club with pride because he’s been such a success story. It’s our job to push these players to the next level, and he’s a full international player now, which is brilliant to see. He really keeps his feet on the ground too, keeps communicating with the younger boys coming through, takes an interest in them … and they look up to him because he’s been there and he’s an inspiration to the next generation coming through at Hale End.”

Gillard was then asked, having seen him play so much in his younger years, which position did he think that Saka is best suited too, and he replied: “He’s extremely flexible, but we always felt if he was in a more defensive role he was playing with the handbrake on slightly. I think when he’s in those forward positions, scoring goals and creating goals, that’s where I probably see him playing long-term, like he is at the moment, whether that’s off the right-hand side or even a central position.”

Well, we’ve already seen Saka play as a right back, and is brilliant as a winger.

Maybe when Lacazette and Nketiah leave next summer, Arteta could maybe give Saka a chance at being our new centre-forward, and give another one of our youngsters a chance to take his place on the wing? If that’s his best position maybe he could be our next Thierry Henry!