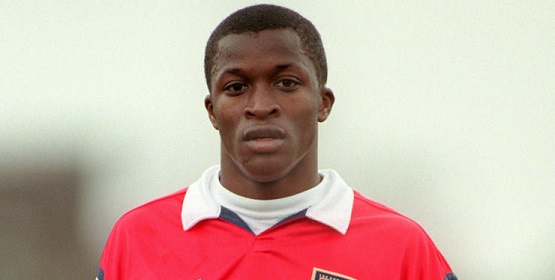 In 1999 Arsene Wenger continued to used his knowledge of young talent around the world, giving him a head start over other managers. A year earlier he signed Anelka and Wreh, who were little known at the time, and was hoping to find another gem in the form of ……..

Diawara was born in Toulon, France and represented them at under age level before declaring his allegiance to Guinea. He then was snapped up by Bordeaux where he got to the 1997 Coupe de la Ligue Final and earned a 1999 Ligue 1 winners medal. Ligue 1 would be the only Leauge he would be prolific in, reaching double figures either side of a failed attempt to make an impact in England. In fact he only stayed at Arsenal for six months before being sent back to France to join Marseille.

I remember him hitting the woodwork often in cup ties but 0 goals between 1999-2002 can’t all be down to bad luck, suggesting the Premiership was just too physical for him, but the fact is that’ as a striker, he didn’t score a goal in three full years when he played at Arsenal, Marseille, PSG and on loan at Blackburn and West Ham.