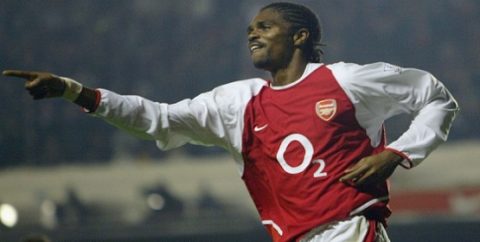 No African player has won more for Arsenal then this next player. In fact, few can compete with his medal collection in general.

Kanu – Played 197 games, Scored 44 goals
He was part of the famous young Ajax side to win the European Cup in 1995, and a year later, after moving to Inter Milan, announced himself to the world with two late goals for Nigeria to beat Brazil at the Olympics. Soon after, his career (nearly life) was halted when he required heart surgery but somehow recovered enough to come back and play at the top. This has led him to this current day doing charitable work, including the ‘Kanu Heart Foundation’

Arsenal Wenger had the trust of his bosses, perhaps where other managers didn’t, to convince his directors that the striker could still deliver at the highest level and he left Inter for Arsenal in Feb 1999. The Frenchmen had signed the likes of Petit and Overmars for modest fees due to recovering from lengthy injuries and again would be rewarded for his faith.

The Nigerian would never be a great goal scorer but certainly a scorer of great goals.

His very first game for the Gunners was marred by him pouncing on a restart throw that should have gone to Sheffield and which led to Arsenal scoring an unsportsmanlike winning goal, but stunners at Middlesbrough, Spurs and an amazing hat-trick at Stamford Bridge will live long in the memory.

He maximised his career by winning the FA Cup with Portsmouth after leaving Arsenal. Harry Redknapp would joke how he could barely run in training, then proceed to be magical come match day. His departure was sad though as like many of his teammates he was forced out of the club with millions owed to him.

Nwanko Kanu the person has been celebrated as much as the player for all his work in helping others, proudly a UNICEF Goodwill Ambassador. I his illustrious football career Kanu won a UEFA Champions League medal, a UEFA Cup medal, three FA Cup Winners Medals and two African Player of the Year awards and an Olympic Gold Medal.

On and off the field, a credit to Africa and Arsenal.