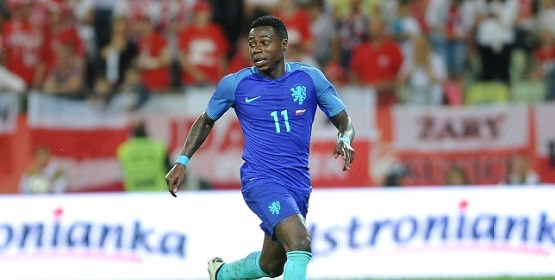 The next player I write about acts as a great example for any Arsenal youngster. You can have all the talent in the world, but it will only take you so far, without the correct attitude or application you will fail.
That’s not just true in football but in any job, you choose to do.

Quincy – played 23 Scored 2
Having impressed in cup ties, many gooners thought Arsene Wenger made a mistake in selling Quincy to Spartak Moscow in 2006. Given the opportunities we would give to other youngsters due to paying off the stadium debt, the fact a manager renowned for giving too much trust to youth would put up so little fight in keeping the winger was puzzling. He had scored 17 goals in 20 games for our under-17 side, including six in a 7–1 victory over Wolves, while the likes of Henry and Bergkamp both were speaking about a young teenager who had impressed them.

Back in the 2005 U20 World Cup (then representing Holland) FIFA described him as one of the stars of the tournament. To put that into perspective, that’s the competition Messi used to make a name for himself. Yet in a sign of things to come, Ajax released him from their proud academy due to ‘behaviour problems’

There is a famous tweet that would come back to haunt Maitland Niles, comparing Quincy with a young Ronaldo.

In other words, everyone saw something special in the midfielder, but Ajax and Arsenal are two sides who don’t give up on youth without cause. Both protected his future by not telling tales, but there has always been the rumour Mr Wenger lost patience with him when he was involved in a fight at a PFA dinner

Now at the age of 33 the man admits his potential unfulfilled. He’s played in Holland, England, Russia, Spain, Qatar, Portugal and Greece. It’s noticeable that a lot of cash strapped managers would gamble on him, seeing it as a chance to get flair for a small fee due to his ‘bad boy reputation’. Often there wouldn’t be the finances to turn loans/trials into permanent switches

It’s sad that he credits his breakthrough U20 World Cup has the best he’s played, admitting he’s still waiting to find that level of consistency. He admits he’s made mistakes but like most of his employers has managed to keep his misdemeanours to himself .

He blames his native homeland of never letting him forget his errors, and credits that for declaring for Ghana, the birthplace of his parents, instead of Holland. He went on to play in an Africa Cup of Nations and a World Cup but was good enough to have done more for the ‘Black Stars’.

In his teens you would have predicted he play in a World Cup for the Dutch. He was that good. But sadly he let all that talent go to waste.