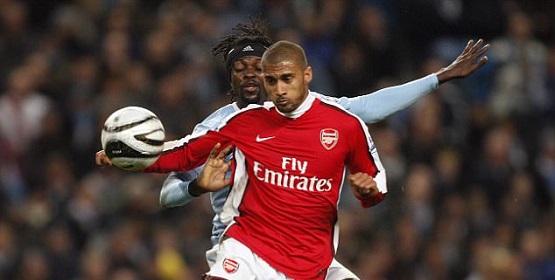 Due to the pressure of paying off stadium debt, Arsene Wenger was happy to give youth a chance, some would say too much of a chance. It became an ideal destination for many youngsters around the world, a big club where you knew you were going to get a fair chance.

Arsenal Wenger used the League Cup to blood some of his reserve players. Many, including Traore ,impressed on our run to the final, which included wins at Goodison, Anfield and beating Spurs over two legs. Not realising we were about to go on a trophy drought, our manager kept faith with his fringe players in the final even though he knew Chelsea would be fielding their strongest line up. Despite defeat, several of our youngsters, including Traore, were given rave reviews for how they handled such an occasion at such an age.

A loan move was not a demotion but part of a club’s policy to develop young talent. Having done well in cup ties, now was the time to prove he could handle the Premiership every week. Pompey mainly used him on the left of midfield, while injuries meant it wasn’t enough to be picked ahead of Clichy.
The full back was still getting interest from the likes of PSG but was now behind Gibbs in the role for even back up for the left back position.

Unlike his first loan move, a season long stay at Juventus was no longer for his progress but based on his playing time blocked at the Emirates. Starting only 10 times in Serie A wasn’t going to help his chances in North London. Ironically his last game as a Gunner was his worst. At that point you could say he had been a decent understudy who maybe was unlucky with the loan destinations he chose.

Yet he was ripped apart at Old Trafford to such an extent that most gooners remember him more for that then any other display. Knowing he was being transferred to QPR days later, his lack of professionalism showed he didn’t have the mentality for this level. At lotus Road he was part of a squad, eventually relegated twice. He then went to Forest who loaned him to Cardiff, meaning the Championship is the only division where he had ever played weekly.

He’s perhaps an example of how picking the wrong club at the wrong time can stop your momentum and grind down your confidence. Portsmouth, Juventus and QPR were clubs all in a mess when he arrived, yet ones he was trusting to guide his future. To sum up his bad decisions, he’s currently forced to play for a Turkish under 21 side due to a restriction on foreign players

He chose to play for Senegal in 2011. His father had played for them, but you could argue having played for all the other age groups, the player had realised a call up from France was unlikely. Rewind back to that League Cup run we had, you would have predicted more from him.