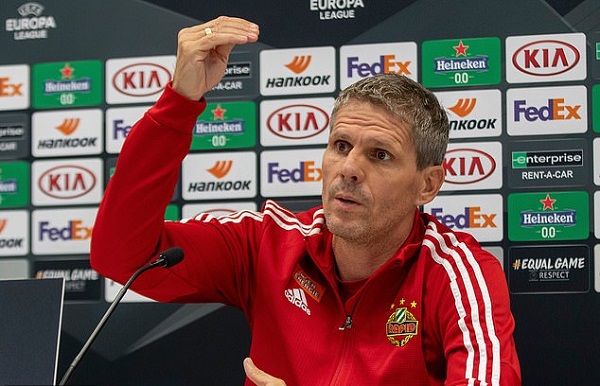 Arsenal will open their Europa League campaign this Thursday when they face Rapid Vienna and the Austrians are confident of pulling off an upset.

In Arsenal’s bid to return to the Champions League next season, one competition that they will look to win is the Europa League.

The winner gets a place in the Champions League group stages for the next campaign and the Gunners are keen to get that either through the top four or through Europe.

They will have to start their campaign in the best possible manner by winning their first group game, but the Austrians will not stand idly by and allow themselves to get beaten easily.

Their manager, Dietmar Kuhbauer was speaking ahead of Arsenal’s Thursday visit and he claimed that his team will have to find a way to disrupt how Arsenal plays their game.

He added that his side cannot afford to sit back and defend because the Gunners are a very good team.

‘We have to try to disrupt the way they play,’ Kuhbauer told reporters at this pre-match press conference via Mail Online.

‘If we play only to defend, that will not be enough. They are a very, very good team despite the probable rotation that comes.

‘They play with tempo and it is always difficult to defend against that – our players will have to be very, very strong in spirit.

‘They are an attractive opponent who of course have won a lot in the past, we have to play at a very good level if we are to get something.’