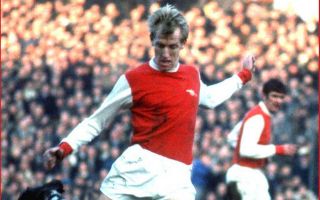 Above club stats are for the domestic leagues only.

Ian Ure signed for Dundee in 1958 after a season at Ayr Albion, and he was a significant player as the Dens Park club won the one and only top tier trophy in the 1961/1962 season.

One of the other outstanding achievements of the club during these times, was to see them reach the semi-final of the European Cup in 1962/1963, losing to the eventual champions, Milan 5-2.

Ian also won eight caps for Scotland during this period, and he was certainly in demand with his physical approach to defending, and The Arsenal came calling in 1963.

They paid a fee of £62,500 under Billy Wright and he repaid this figure by playing all but one game in his first season, also securing another two full caps for Scotland during this time.

As so often happens with players of The Arsenal, however, he suffered injuries, a knee operation and a twice broken jaw, culminating in a drop in form during the 1964/1965 and 1965/1966 seasons…but still managing more than 20 games in each of those seasons.

When Bertie Mee took over at The Arsenal, Ian played a major part in his team. In the 1966/1967 season he played 44 matches as they finished 7th in the league and progressed to the fifth round of the FA cup.

One incredible stat to point out is that the 47 goals conceded in the 1966/1967 season, was the lowest since the 1937/1938 season of 44 goals, when we won the title and eclipsed two seasons later with only an amazing 27 goals conceded!!

It’s worth remembering that, over his six years at the club, Ian played 202 matches and scored two goals, collecting two runners up medals in the 1968 and 1969 League Cup finals.

The problem was that Ian made some really high-profile mistakes during his career, the worst being the two during our 3-1 humiliating loss to Swindon Town in the 1968 league cup final.

Firstly, a misjudged back pass that led to Swindon’s first goal, then their third goal saw him lose the ball in midfield, allowing Rogers to run over 40 yards and score in the 109th minute.

I feel this was completely unjustified criticism if we look at his overall Arsenal contribution and with the emergence of Frank McLintock and Terry Neill, it was decided to transfer him to Manchester United.

After retiring from football in 1974, Ian became a social worker in the Kilmarnock and Glasgow area.

With his blonde shock of hair, Ian was always prominent at every game and was another “Marmite” player”… someone I liked to watch play alongside Frank McLintock, and I hope the figures that he helped achieve during his stay at the club, gives a much more positive side of his contribution to our club.

Thank you, Ian, for all the memories, both good and bad!!

Thanks to Wikipedia and arsenal.com for the stats used in this article