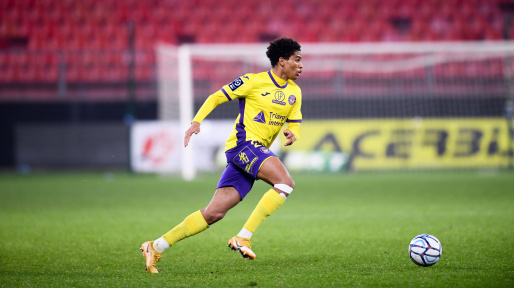 Arsenal fans have been subjected to many unbelievable transfer rumours in the last few weeks, but our links to the Toulouse striker Amine Adli looks like a real possible target.

Adli plays in the French Ligue 2 but he has garnered many admirers from the top Leagues, with AC Milan, Dortmund, Leicester and Arsenal named as suitors in the press recently.

The 21 year-old has hit the headlines in France as Adli was named Ligue 2 player of the year after scoring eight goals and eight assists for Toulouse as a winger or attacking midfielder, but is available right now after refusing to sign a new contract with the Tolosans.

The Toulouse President Damien Comolli said about Amine Adli, who has 12 months remaining on his current contract.
“He is here, he has an extension offer. Since last July, I have been trying to extend his contract. I think I have held 12 or 13 meetings. He did not want to, which I regret but respect on the other hand because he is someone who handled himself very well throughout the whole of last season, we have to underline that. For the moment, I am getting a lot of phone calls, but no offers.”

There have been rumours that AC Milan were leading the chase for Adli, but if they are arguing over a price of just 9m euros, then I think Arsenal should go all out to get the youngster on board as quickly as possible. Don’t you?