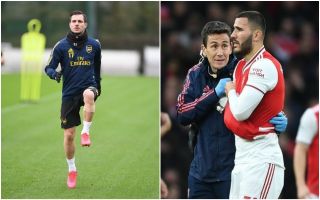 Arsenal have issued an update on the fitness of Sead Kolasinac and Cedric Soares via their official website.

Cedric joined the Gunners on loan for the remainder of the season in January, as per the Guardian the Portuguese star’s contract expires at the end of the season.

The right-back has been sidelined since his arrival and Arsenal’s latest update suggests that the full-back is aiming to return to full training next week.

On the Kolasinac front, the Gunners state that the left-back is aiming to return to full training by the end of March.

The Bosnian star sustained a shoulder injury in the early stages of our recent win against Everton.

With Cedric edging closer to a return to action, Mikel Arteta will soon have another option to call on in defence.

Cedric’s return would give the Gunners the chance to rest Hector Bellerin, the Southampton star can also be deployed at left-back.

With Arsenal’s defence still looking quite shaky, the experienced Cedric could prove to be an important player for the north London outfit in the final stages of the season.

Cedric boasts plenty of Premier League and international experience, something we hope will work in our favour as we push for a finish in the Champions League spots.

Horror-tackle may mean defender has played his last match for Arsenal
13 November 2021, 17:02

“There was always this feeling for Arsenal” Portuguese star reveals he was always an Arsenal fan
13 November 2021, 7:39

Forgotten Arsenal man insists he will keep fighting for a place in the team
12 November 2021, 23:00