Arsenal’s Ox finally ready to pull his weight next season?

It has been yet another season of frustration and disappointment at both club and international level for the Arsenal and England star Alex Oxlade-Chamberlain and there has even been a lot of debate among Arsenal fans about whether he will ever fully deliver on the early potential he showed at Southampton and in flashes as a Gunner.

It all started so well for the Ox last season, with him scoring the only goal of the Community Shield against Chelsea to give Arsenal the trophy and Arsene Wenger his first win over Jose Mourinho. But once again his season was then blighted by niggling injury problems and poor form and he added just one more goal to his tally, which is now just 14 goals from 149 Arsenal games.

This Euro 2016 is the second tournament in a row that the youngster has missed and unless he is performing regularly for his club that is unlikely to change. So with the emergence of young Alex Iwobi and with the likes of Jack Wilshere and Theo Walcott competing for places, Chamberlain must be aware that the coming season is a massive one for him and his future at the club. 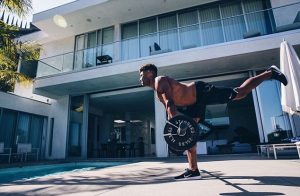 At least he should be fit and ready to go though, as a Daily Mail report reveals that the 22-year old is taking time out of his summer holiday in LA to hit the weights and get into peak shape before joining up with Arsenal for pre-season training. Will this season be the one in which the Ox finally pulls his weight for Arsenal?