Reports have linked Ianis Stoica with a move to Arsenal and in a potential hint that he wants the move, he is changing agents.

Arsenal hasn’t made their approach for him official yet, but it certainly helps a player to have his career managed by an agent that has a good network across Europe.

GSP in Romania reports that Anamaria Prodan is currently the youngster’s agent, but he wants to change to Ioan Becali.

Sport Witness says the latter engineered Dennis Man’s transfer to Parma and that of Olimpiu Morutan to Galatasaray.

These moves show he can take a Romanian player to a top European club and Stoica wants to be under his guidance.

Any report could easily link arsenal to a youngster, considering how Mikel Arteta is giving chances to those at the club.

However, the Gunners certainly cannot sign every inexperienced player who is doing exploits in Europe.

We also have budding players being developed at our academy who will be given chances soon.

Bukayo Saka and Emile Smith Rowe have proven we don’t exactly need to spend money on youngsters from other clubs. 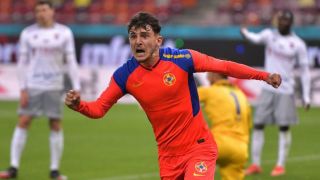