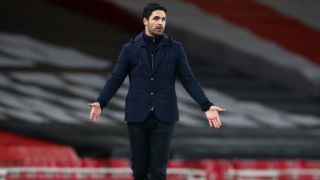 Arteta admits he has to be ‘careful’ in regards to relegation

Arsenal manager Mikel Arteta has admitted that he has to be ‘careful’ as his side flirt with the possibility of relegation, as his side sit just four points off the drop zone.

The Gunners boss made an incredible start to life in North London, bringing a new hard-working mentality back into the side, and that helped the club to rescue a place in Europe by winning the FA Cup, before starting the new season with a Community Shield win also.

Things have taken a drastic turn of late however, as they have picked up just five points from their last 10 Premier League matches, and while that sounds bad, it is worse when you analyse those results.

Arsenal have been credited with just four goals in their last 10 league matches, two of which were penalties, whilst we have shipped in thirteen goals, suffered three red cards, and shamefully been beaten by own goals during this time.

Our form has now left us in the worrying position of flirting with the idea of battling relegation, having dropped to 15th position in the table, with just four points separating us from the dreaded bottom three.

Manager Mikel Arteta has now admitted that he must be careful not to get pulled into it, and that his team doesn’t have much experience fighting in such a way.

“When you are in this position and you have the points that we have at the moment, you have to look and be careful because we haven’t been a lot of times in this position,” Arteta said in his pre-match press conference (via Arsenal.com).

“I think last year when I came in we were in a very similar position and the same talk was around the place, it is normal because we need to start picking up points and then forget about it and start to look up the table much further. But it is a normal thing to do when you just look at the table and get the conclusions pretty quickly.”

Should Arteta not be more confident that his side will not be at risk of dropping any lower? Could our players be able to bring the necessary attitude to fight if we were dragged into such a dog-fight?