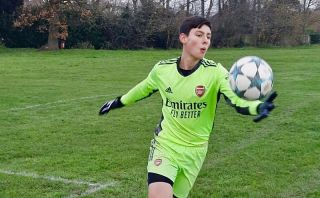 With several first-team players out with their national team for this break, one lucky Arsenal youngster has been promoted to the club’s first team.

Arsenal Under-16s goalkeeper, Alexei Rojas Fedorushchenko revealed on his Instagram account he had trained with the club’s first team.

He posted an image of himself with Mikel Arteta on his Instagram page and captioned the post: “Incredible experience training with the first team today! Very grateful for the opportunity @arsenal and learnt a lot. Keep working hard”

Arsenal has been one of the leading clubs in terms of youth promotion and Fedorushchenko would be delighted to have gotten his chance to train with the first team.

The youngster is still a long way from playing for the senior Arsenal team, but he would consider this an enormous sign of progress.

Bukayo Saka and Emile Smith Rowe are the leading academy graduates at Arsenal, but several others would come through as long as Mikel Arteta remains the club’s boss.

Arsenal has a solid number one at the moment, with Aaron Ramsdale proving every week that he is one of the best signings of the summer.

Fedorushchenko would know it will take a long time to get to where he is competing for the number one shirt at the club.

But he can be in that position in a few years if he keeps working hard.