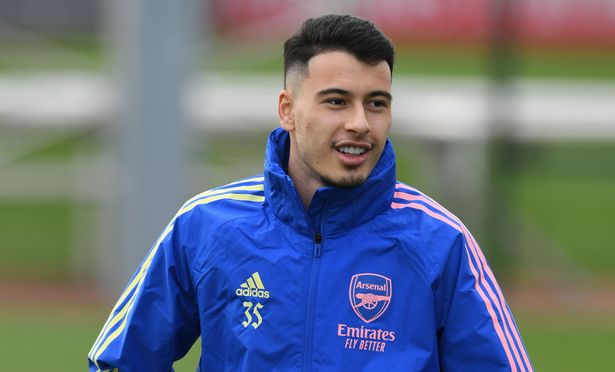 Gabriel Martinelli is working hard on his recovery at present after nearly six months out, and his Arsenal boss Mikel Arteta has hailed his impact in training.

The Brazilian hasn’t featured in the first-team since succumbing to a knee injury shortly after the Premier League restarted in June.

Martinelli is in line to make his return in a Premier League 2 matchup by the end of the month, but is back in full training with the senior squad as he builds his way back into contention.

Despite remaining unavailable, the manager insists that he is a great player to have around the team on the training ground, and states that Arsenal ‘need players like him’.

“Gabi is another one that even in a moment of adversity, you see him training and everything he brings to the team, his energy, his passion, his motivation, is translating positive emotions to everybody,” our manager said in his pre-match press conference ahead of the clash with Rapid Vienna (via the Arsenal official website).

“He tries and goes and goes again and he wants to score a goal. He’s ruthless in training in every single action and the more players and staff you have to add that, at the end that gets translated to what happens on the football pitch and over time you will be stable.

“Gabi’s pressing brings something different to the team and we need players like him.”

The boss was then asked how the youngster would handle the pressure of such expectation on his return, but the boss was coy on rushing him into a first-team role.

“Time is the key word in this industry, and nobody is going to give you time!” Arteta said. “The moment the ball doesn’t go in the net and you lose a football match, you’re going to question all the rest, so with Gabi it’s the same. Now he needs time.

“He’s done it for a period of time and in certain moments throughout a game, but consistently for three years, two or one? He’s never done it. I’m sorry, he’s never done it, so we cannot put that pressure on him.

“It’s like with Bukayo and other young players that we have, they’ve never done it in their career, so why do you expect him to do it today? And in which environment? In which context? Patience, but he’s a positive guy to have back on the team because he’s such a character.”

I personally cannot wait to see Martinelli back in our famous Red on the pitch, and it certainly sounds as if there is little doubt that he will be picking up where he left off when given a chance.

Arteta warns his players about ill-discipline against Tottenham
25 September 2021, 21:30

“Look at him after last night” – Pundit claims Arsenal boss will be confident of victory v Spurs
23 September 2021, 21:38