Arteta happy with a clean sheet and goals too….

Arsenal are steadily climbing back up the table, and the excellent 3-0 win over Newcastle last night finally put them into the top half of the table, and we are just seven points behind Liverpool in fourth place.

Yet again we were stalemated 0-0 at half-time, but just five minutes after the break Aubameyang got back to his goalscoring ways to put us 1-0 up, assisted by Thomas Partey, who was returning to the team after injury.

Ten minutes later our two super youngsters, Smith-Rowe and Saka, combined to double our lead and put the game beyond doubt, and our captain Aubameyang wrapped

It seems incredible that the Gunners can go seven games without winning, and then suddenly turn things around and win five in a row in the League, only conceding one goal in the process. To think that at Xmas there were many Arsenal fans calling for Arteta to be sacked or face relegation, so our coach is obviously happy with the turnaround in form.

Arteta told Arsenal.com after the game: “Yes I am really pleased with the performance overall because collectively and individually it was really strong from the beginning. It took us longer than we wanted to score the first goal because in the first half we had some big chances as well, but overall the team looked confident, looked solid, looked compact and very clear about what we had to do, defending and attacking, so I am really pleased with the clean sheet, the goals, and overall the run and the momentum we have. 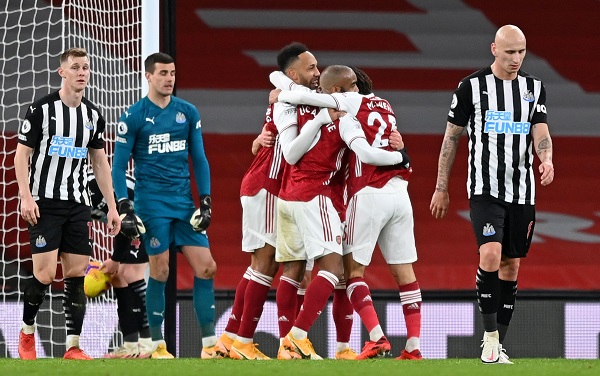 “It is part of understanding these types of games, and when the team is able to come out of these games with this result and confidence, it helps a lot for the next one because they know that the moment is going to come, that we cannot lose our structure, our organisation. Of course there were things, that at half time, we had to improve and do better, to be more consistent, quicker, more efficient in certain moments to attack. This is great information for us and for them it is great to believe against these structures we can outplay them, we can nullify them to do very little in our own box and we can come out and score three, four or five goals.

“We always say that winning is the best thing for any collective team or any individual as well. But for us to get in the momentum that we are with the clean sheets – that was our fifth one in a row – we have managed to do that, the fact that we are scoring goals and everything is more fluent. The energy, the cohesion around the team and the spirit is better. So I’m glad, but we have to maintain that run and keep going. There are still a lot of things that we have to do better and improve but overall, I’m really pleased with how we’re playing at the moment.”

Has our defensive work been the base for our upturn in fortunes?