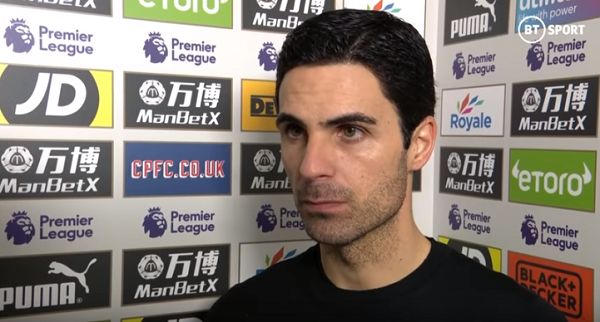 It seems to be a regular occurrence this season that Arsenal can only maintain high pressure for one half of every game, and are extremely prone to surrendering our advantage after taking a one-goal lead, especially away from home.

It has already been revealed that Arteta thought the players were not fit enough to see out a game when he arrived, and he is trying to improve that on the training pitch.

Yesterday, yet again, the same thing happened, and Arteta was disappointed that we “switched” off in the lead up to Palace’s equaliser. “I was pleased with how we started the game, with the way we dominated the first half.” the Boss said on Arsenal.com. “We saw things that we’d worked on in training and the way they executed them was good.

“But obviously after the break we knew they were going to push, they had more bodies forward, they put us under pressure more. We started to give bad free-kicks away and that’s something that we have to avoid. Then we switched off for the goal. We completely switched off and allowed them to put the cross in. We turned and conceded the deflection, and I was very disappointed with that.

“After that, I must say that we reacted really well again after conceding the goal. After Auba’s red card, we reacted even better in my opinion.”

He went on to say: “At this level in the Premier League, if you switch off for two seconds, five seconds, you will concede a goal straight away. I’m going to have to find a way to try to avoid those situations. It happened today and it cost us two points.”

But, having said that, the players did seem to react to going behind and losing Aubameyang, and we did actually come close to taking all three points in the end. As Arteta said: “That’s what I wanted to see from my team with 10 men. The reaction was really, really positive and they wanted to win the game. They went for it and we had three or four really good situations. We created the best chance with Nico and Laca. We were unlucky not to win the game.”

Unlucky we may have been, but the fact remains that we have won only one of our last ten away League games, and are stranded 11 points behind Chelsea in fourth, with little chance of now making an incredible comeback, but we can only carry on improving until we are recognised to be a formidable side again next season…