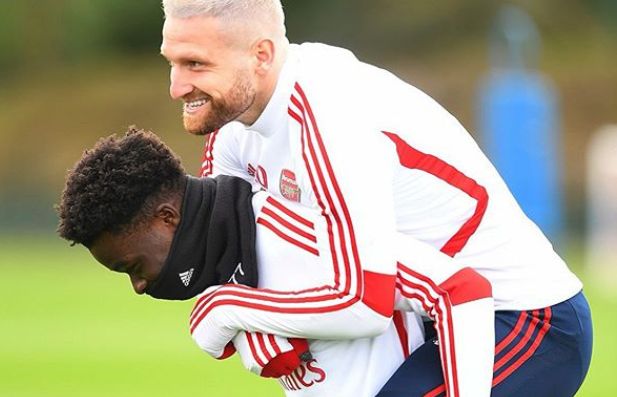 Arteta has given Arsenal players back their peace of mind

Mustafi is truly enjoying himself at Arsenal. by Lagos Gooner

Hello! I hope I won’t sound like a groveler with what I am about to say here. I hope people will not come at me for wanting to extol Mustafi a bit? Against Everton on Sunday, while Arsenal strikers were doing their thing at the scoring end of the pitch, the Arsenal defenders, especially Mustafi, were doing what they know how to do best; defending our goal post.

Yes we conceded two goals; yes we were jittery sometimes but in all, we came out of the game with a victory because our defenders were making a difference at the back. David Luiz and Mustafi are starting to form a defensive partnership and it is starting to yield results. With Mustafi at the back, David Luiz has been venturing forward more often. He surely believes in his defensive partner’s ability to cover up well for him, which Mustafi has been doing so well in recent games. The once semi-reject at Arsenal, has now become the cornerstone…..

Did we notice that Mustafi has changed his hairstyle? Yes! Against Everton, our German hero spotted a dyed hair. Mustafi looked so funky in his new hairstyle. I could not help noticing how different and how free he felt on the pitch. Should I tell you what I read into Mustafi’s new look? His new look to me signifies peace of mind. It a man who is doing well, that will care about how he looks! He wants to express himself with his look. Being a student of communication, what the look communicated to me was happiness and peace of mind. Last season or two seasons ago, Mustafi wouldn’t have tried changing his hairstyle because his mind would have been preoccupied with footballing issues. He was under fire from different angles, and the last thing on his mind will be to change his look. Now, he seems to have the peace of mind everybody needs to do well, and he can now think of other aspects of his life.

Now that the team is playing well, the players will feel more relaxed, and when they feel more relaxed, they can express themselves better both on the field and off the field. What this means is that the player will be in the right frame of mind to play to win. A happy man is a well motivated man, my dad once told me. The players are happy, the stigmatized players are gradually feeling wanted and the team has started scoring goals! What more can an Arsenal fan ask for? I see the change in Mustafi as a testimony to how a player can change from bad to good, with the right training from the right coach. We are Arsenal and we are proud.