Arteta persuades Granit Xhaka to stay at Arsenal, so lets get behind him shall we? 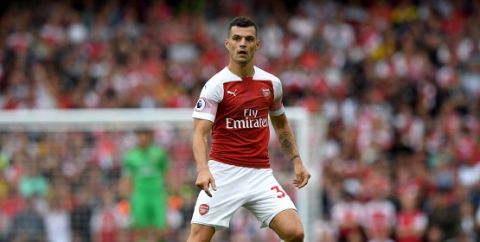 Granit Xhaka is here to stay, so; Fingers crossed! by Lagos Gooner

Happy new week Gooners around the world; hope we are getting set to give our full support to the team tonight, when they play against Leeds United in the FA cup? Arsenal, with 13 FA cup trophies, are looking to add another FA cup to their trophy collection, and if we are to believe the words of our new manager, then winning the FA cup seems to be a priority for the club. Come on gooners! Let’s support our team in full tonight.

Friends, while we await kick off today, I want to ask, have we noticed that there is one particular player who seems to feature in any of our coaches’ team? Have we noticed that Granit Xhaka, despite his obvious flaws and temperament, seems to always feature in the first team of any coach? At the national level, he features regularly for the Switzerland national team. At club level, he has hardly missed any game, no matter the club he plays for. So, what is about Xhaka that these coaches know but the fans don’t know?

I see Xhaka as somebody who has charisma and knows how to lead people. He is the captain of the Swiss national side but when it came to sacrificing for the team, he offered his captainship to Xherdan Shaqiri in an effort to get him to return to the national side. Only a man, who thinks about the general cause can do this, in my opinion. Is it his willingness to sacrifice for the team, that endears him to every coach he has ever played for? What is it about Xhaka that makes him an integral part of any team?

Under Emery, he was made captain of the team; his team mates deemed him worthy enough to captain them when Emery asked them to vote for their captain. What did the team mates see in him what the fans are not seeing? This young obviously knows how to make himself likable, and that is a good trait of a leader. If a team with so many good players could decide to choose Xhaka as their captain, then I think it is normal for any coach to include him in his plans to move the team forward.

When Xhaka was bought by Arsenal in 2016, one of the qualities many football analysts believed Arsenal were going to enjoy from Xhaka was his ability to make a long pass from the back to the dangerous area of the opponents. We have seen a bit of this skill from him, although we expect him to be doing this on a more regular basis. His hard tackling style cost us games in the past; and this didn’t go down well with the fans, with many of them openly confronting him off the pitch. Late last year, he was stripped off the captaincy and he was taken out of the team for a while, to cool down the tensions between Xhaka and the Arsenal supporters; a tension that was majorly caused by the Swiss international.

When he was stripped off the armband, Emery was still coach of Arsenal. Emery later brought him back into the team, before he was sacked. Ljungberg made use of Xhaka In almost all his games while he was coach of Arsenal. Now, Mikel Arteta, our own future Guardiola, is coach of the team and if there is one thing so certain, it is that Granit Xhaka will play a huge role in Arteta’s plans. Xhaka may even have the captaincy given back to him by Arteta, according to a quote from Arteta in Football London. The Boss was asked if Xhaka could get the armband back, and he replied: “I don’t know, time will tell that. Now he’s happy to stay here, he’s completely committed and that’s a big plus today.”

However it pans out for Xhaka, I still ask myself the same question, what is it about Xhaka that I don’t know but the coaches do? All we can do is get behind him, and hope that he proves his coaches right in the end.