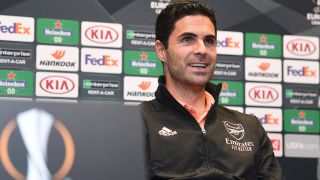 Arteta pleased as punch after ‘ruthless’ demolition of Slavia

After our toothless first leg against Slavia Prague last week, we could not have bounced back in better fashion. It could have been even more embarrassing for the home side, but I don’t think Mikel Arteta will be finding much to complain about with a clean sheet and an emphatic 4-0 scoreline, against a team that never lose at home!

So no surprise that Arteta was all smiles after the game. “I am really pleased because we are through and I think we are through in a really convincing way,” Arteta told Arsenal.com. “In this round, 4-0 isn’t easy. They haven’t lost at home in almost two years and they are a tough opponent, but we had some big individual performances and then collectively we understood the game really well and we were very efficient.

“In Europe more than any other competition, games are decided in both boxes and we were ruthless in both of them. We kept a clean sheet and we scored four goals and could have scored more.

“We didn’t [switch off] and we cannot do it because this team doesn’t allow you to do that. It’s very similar to Leeds, and we know their spirit from when we played them at home and we did some really good things. They keep alive and they keep believing and they’re a team that fights until the end.”

There was pretty no much point in fighting back after half time when Slavia needed to score four goals to go through, and even less when Lacazette added yet another one!

But you have to hand it to the boys, there was no sign of nerves right from the kick off and they certainly didn’t bottle it. I think I am simply going to have to agree with Arteta. We were ruthless!