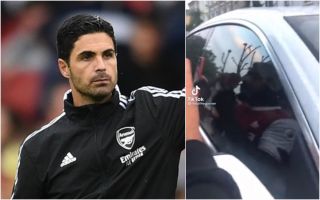 Angry Arsenal fans confronted Mikel Arteta and attempted to stop him from leaving the Emirates yesterday.

The Spaniard had seen his team beaten 2-0 by Chelsea that evening and as he headed home after the match, some ugly scenes occured with videos surfacing online of Arsenal fans stopping the frustrated manager from leaving the stadium.

The Daily Mail reports that they shouted at him while making it clear that they wanted him out of their club for good.

The report says their loss to the Blues means Arsenal has suffered their worst start to the Premier League season in their history.

The Gunners fell to goals from Romelu Lukaku and Reece James as Chelsea finally beat them for the first time in four recent games.

The club’s fans turned on its owner last season when they joined the European Super League and demanded for Stan Kroenke to leave.

The American promised to invest in the squad when the transfer window reopened and has backed Arteta with around 150m euros worth of signings so far.

The Spaniard now has to deliver and easier opponents won’t come soon as they will face champions, Manchester City, in their next Premier League game.