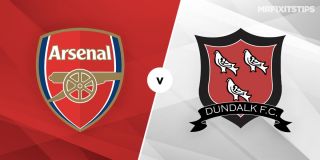 Arteta wary of Dundalk threat but coy on their chances

Arsenal’s Mikel Arteta has played down Dundalk‘s chances of a surprise win at the Emirates this evening.

The Gunners will play host to the Irish side in the Europa League this evening, with the sides never having played each other competitively before.

The Spaniard will be confident of maintaining their 100% record in the competition thus far following their win in Austria last Thursday, while their opponents lost at home to Molde.

Arteta has remained coy on his opponents chances, and refused to rule out a shock, but doesn’t want his player to ‘take anything for granted’.

When asked of his side’s chances of a surprise loss in the pre-match press conference, he replied(via Arsenal): “I don’t know. This is football and I’ve seen a lot of things in this game, so I don’t take anything for granted.

“I always expect the opponent to be at their best. After that I try to convince my players what we have to do to win the game and execute it in the best possible way. That’s it and we’ll see what happens tomorrow.

“As I’ve said, their strengths are the unity of the team and how hard they work together and how well they are organised. There are a few bits where they look really dangerous in certain contexts.

“Against us in certain situations it’s a little more complicated, but yes, if you allow any team time and space, they will create issues. They’re really strong on set-pieces as well and I’m sure they will have prepared them for tomorrow, so we will have to control the normal aspects we do every week.”

The fixture will no doubt be about what Arsenal can bring to the match, and you would expect our side to take the game to our rivals and not show too much respect in the early exchanges.

Is anyone worried about a shock result tonight following our league blips of late?

Arteta warns his players about ill-discipline against Tottenham
25 September 2021, 21:30

“Look at him after last night” – Pundit claims Arsenal boss will be confident of victory v Spurs
23 September 2021, 21:38