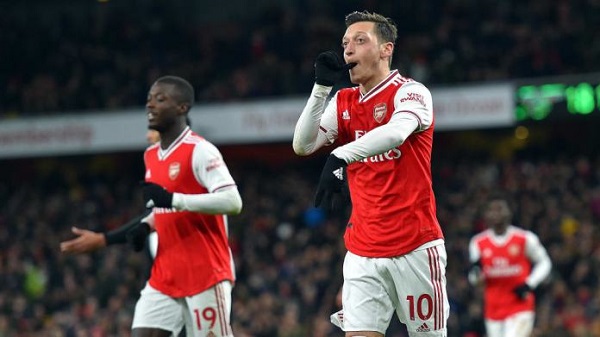 Mesut Ozil finally got his first goal of the season and what a goal it was, not because it was a stunning 30-yard screamer but because of the records, it set.

Every single Arsenal player was involved, all eleven of them and there was 35 passes in total, ten more than any goal scored in the Premier League this season.

35 – There were 35 passes in the build-up for Mesut Özil's goal vs Newcastle, making it 10 passes longer than any goal scored in the Premier League this season, with all 11 @Arsenal players involved at least once. Mikel. pic.twitter.com/9p2I09HMJP

If Real Madrid, Barcelona or Liverpool had done what Arsenal did today with Ozil’s goal it would have been characterised as total football.

Well, I will say it, it was as good a goal from a team perspective that you will see anywhere in the world. To have every single player involved and to clock up 35 passes is simply sensational.

This one goal shows exactly what Mikel Arteta is trying to do and it may have been “just” Newcastle but this was the same Newcastle team that beat Chelsea, Tottenham and Man Utd and that held Man City to a draw.

A perfect goal as Opta has shown.