Aubameyang’s agent takes swipe at Arsenal as his struggle continues

Pierre-Emerick Aubameyang is suffering his worst goal drought since he joined Arsenal in January of 2018.

The Gabonese attacker is one of the most lethal strikers in the world and he has proven that for years.

However, this season has been different as he continues to struggle for goals.

He was handed a new deal at the start of the campaign because of his fine form in the last two seasons.

However, the new contract has looked undeserved due to his current poor run of form.

The 31-year-old fired blanks again as Arsenal were beaten 2-0 by Tottenham on Sunday and it seems that he isn’t exactly the problem, at least that is what his agent, Kwaku Mensah, thinks.

The Gunners game against Spurs was yet another match that they failed to cause any serious problems for their opponents despite the majority of the possession.

Mensah must have expected them to score, but as they didn’t he took to his Instagram page to blame Arsenal’s tactics for his client’s goal drought.

He posted a screenshot of some statistics on Instagram which showed that Arsenal was 17th in the Premier League ranking for goals scored, 18th for shots on target, and 20th for chances created.

He then captioned the post: “If you create chances…” 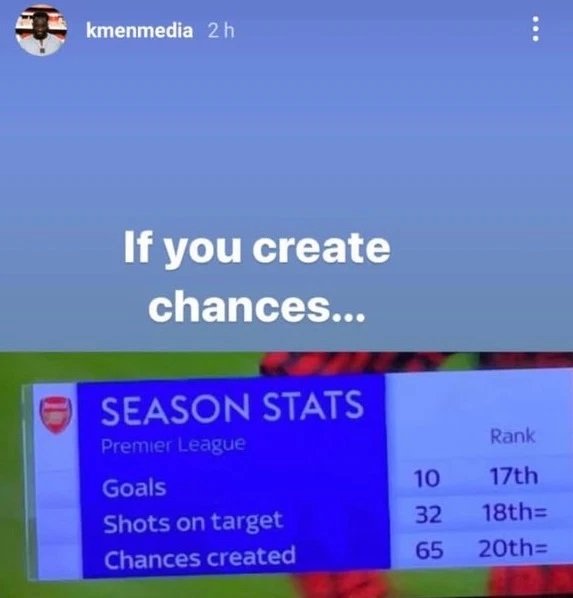