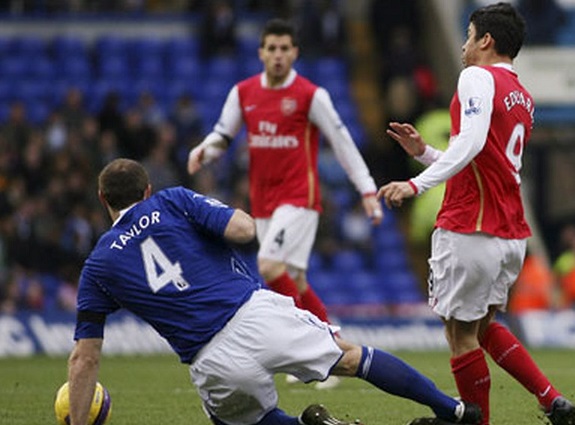 Bacary Sagna has relived the moment that Arsenal’s season imploded in 2007/2008 despite them opening a five-point lead at the top of the Premier League table with 12 league games left to play.

They, however, suffered a major dip in form and lost their place at the top of the standings in one of the most uncharacteristic title slumps in recent history.

Sagna joined Arsenal in the summer of 2007 and he looked set to win the Premier League in his first year, but that slump cost him and his teammates the title and he has revealed the moment, against Birmingham City, when it all came crashing down for them.

That was the game in which Eduardo had his ankle broken by Birmingham’s Martin Taylor, an injury that basically ruined his career at the top level. That entire match, with William Gallas doing his infamous sit down in the centre of the pitch at the end and the dropping of two points to an injury-time Birmingham penalty is one game that most Arsenal fans want to forget.

“It was a massive blow to our team We were so confident, we had some form and we were not scared of anyone,” the Frenchman told Goal.

“Everything was going our way. Even when we began the season, we managed to win no matter what. Every time we were losing 1-0, we used to come back and win. The fans played a big part in it as well. They were pushing and the atmosphere was great.

“We were doing very good and Eduardo was flying, he was scoring many goals. He was our main scorer and the fact that he got injured I think it put some insecurity in our team, it maybe made us think about what might happen next.

“It was quite the shock to be on the pitch that day. I don’t want to use it as an excuse because after this we didn’t manage to win for so many games, which was not normal.

“That day at Birmingham was bad. It put insecurity into the team and we were not able to come back.”

These Arsenal fans believe Tomiyasu reminds them of a former player
21 September 2021, 13:45