Which Barcelona players would Arsenal swap for Ozil? 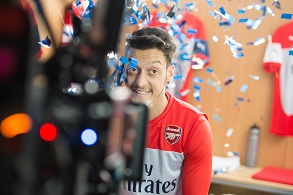 If you have not seen the latest Arsenal transfer rumours, both the English and Spanish football media are reporting that Barcelona, the current holders of the Champions League, La Liga and Copa Del Rey trophies, are seriously considering making a transfer bid for the Arsenal and Germany international play maker in the summer transfer window.

But because of a clause in Ozil’s contract that his former club Real Madrid insisted on when they sold him to the Gunners, Barcelona are apparently planning to offer us a player exchange instead of a cash deal according to a Metro report.

Now assuming that Arsene Wenger does not just tell them to sling their hook, I thought it might be interesting for us to look at which of the Barcelona players might we consider swapping for our assist master. Their front three of Lionel Messi, Luis Suarez and Neymar would all be very welcome in north London, of course, but I have a feeling that these guys will not be part of the offer. It would be like Barca offering us a “Deposit 10 Get 60” free bonus, but I doubt they would be willing to play that game!

So, here is the rest of the Barcelona squad, excluding the youth and fringe players, and there is no doubt that some or most of them would certainly strengthen the Arsenal squad, so which player or combination of players would you consider swapping for Ozil?

Who would you pick out of that lot?