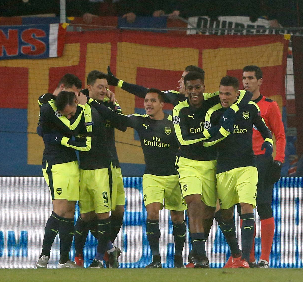 The visitors Arsenal were red hot against FC Basel tonight in the last UEFA Champions League group A (Match day 6) with Arsene Wenger’s men putting 4 goals pass FC Basel thanks to our Spanish forward Lucas Perez (who scored a hat-trick), and Alex Iwobi who added more gloss to the score line with Arsenal’s fourth and his debut goal in the Champions League.

It was a night where Arsenal clinched a vital away win at the expense of the hosts who missed out on a Europa Place following the defeat. With 4 goals scored there were impressive performances from the Arsenal players for sure.

Here are my Player Rating of the Arsenal players in the game….

GOALKEEPER
DAVID OSPINA 7.0
Had a nice game between the sticks as he made a good reflex save to deny FC Basel’s Renato Steffen’s left foot strike in the game. Could do nothing as he was exposed for the consolation goal.

DEFENDERS
GABRIEL PAULISTA 6.0
Moderate outing for the Brazilian who deputized for recuperating Hector Bellerin. He was very comfortable when in possession.
LAURENT KOSCIELNY 6.0
Average performance from the skipper who was guilty of some poor challenges in the game, was ball watching when Renato Steffen took a shot at goal which was well saved by David Ospina.
ROB HOLDING 5.5
The young defender had a moderate game but should have done better in helping Arsenal keep a clean sheet.
KIERAN GIBBS 6.5
Was impressive on the night as he overlapped well on the left wing. Showed flair and composure on the ball as he confidently passed the ball around. Good display from the defender.

MIDFILDERS
GRANIT XHAKA 6.5
A nice game from the midfield player as he showed vision and his passing range with some cross field passes. Though he was guilty of some rough challenges on occasions.
AARON RAMSEY 5.5
The midfielder ran out of steam and was replaced by Olivier Giroud in the game. Not the best of showing from the midfield player in an Arsenal shirt.
MESUT OZIL 7.5
Fantastic game from the silent playmaker. Showed quality and dexterity on the ball as he skipped past FC Basel players. Was very instrumental in Arsenal goals.

ATTACKERS
ALEX IWOBI 6.0
Not the most confident performance from the young lad. Showed some flashes of what he can do with some intelligent passes and capped it up with a goal.
ALEXIS SANCHEZ 7-0
The Chile forward was electric as he was involved in the earlier goals. What a free-kick to get the Basel goalie at a standstill (well beaten in goal) with the cross bar to the rescue.
LUCAS PEREZ 8.5
Good positioning to notch a Champions League hat-trick after a period of inactivity for Arsenal. The third was even better as he made a timely run to finish up a good move from Arsenal.

SUBSTITIUTES
MOHAMED ELNENY 5.5
Had a decent spell on the pitch as he made some positive adventures in the game and was excellent in the double pivot along with Granit Xhaka.
OLIVIER GIROUD 5.0
Needs to do more to get back his place in the team. Should have scored from a well-tailored and visionary pass from who else but Mesut Ozil.
THEO WALCOTT 4.5
Couple of good runs but his final ball were not the best and his shots need more power to beat the goalie between the sticks.