There was much speculation about the injury to the Arsenal defender Hector Bellerin after he missed training with the Spanish U21 side this week, which was only increased when we discovered that he had posted a picture of his swollen ear after the Tottenham match.

But today it is being reported that the 21 year-old actually has a torn ankle ligament very similar to the problem suffered by Lucas Perez not long ago.

This problem allegedly first appeared during the last international break when Bellerin appeared against the San Marino U21s, and flared up in the Arsenal training session before being pulled out of the side that went to Ludgorets. 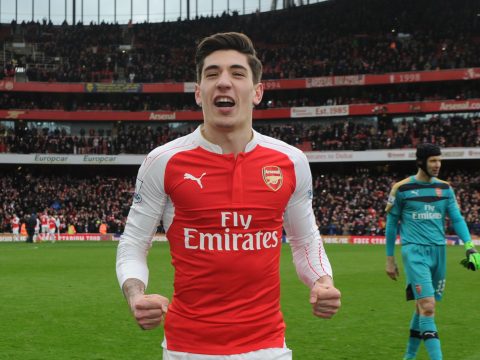 In hindsight perhaps the youngster should not have played against Tottenham, because as soon as he joined the Spain side the problem became more apparent and he was pulled out of training and eventually dismissed from the squad altogether.

Lucas has gone to his old club Deportivo for treatment on his ankle and is expected to miss six weeks, but the signs are that the Arsenal medics are hoping that the younger Bellerin may return a lot quicker and could recover in just two to three weeks. But the fact is that he definitely won’t be playing against Man United and I’m expecting Carl Jenkinson to get a little run in the first team….